Holy Cross In The News 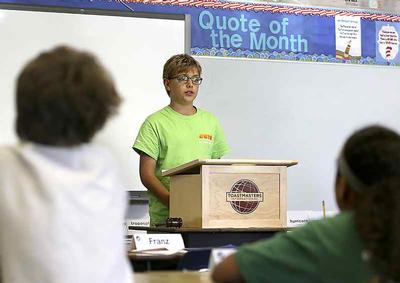 SANTA CRUZ >> Waiting for the applause to die, Cruz Cooper, 10, stood at the classroom podium and took a deep breath before launching headlong into his speech.

Cruz’s two-minute tale, “The story of when I went crazy,” about a pretend leprechaun and a series of silly antics, was one of several speeches in the Holy Cross School fifth-grade classroom on Thursday — the finale of the Santa Cruz Downtown Toastmasters Youth Leadership Program.

Students learned to overcome stage fright and to avoid filler words such as “um” or “uh.” They practiced speaking with and without preparation, and learned how to listen and evaluate each other’s skills.

“I’m an IT guy who tends to speak in ‘geek speak’ and not always succinctly,” said Ginsburg, who now competes in Toastmasters speech contests on the weekends.

The goal of the youth program is to start children early with public speaking, he said.

“Let’s face it, if you can develop these skills at a young age, you’ve got a head start on your peers,” Ginsburg said. “If you’re able to communicate effectively and also give good feedback, you’ve got skills that can last you a lifetime.”

“When I first heard ‘Toastmasters,’ I thought it was going to be some eating toast thing,” said Cruz, who said he learned how to raise and lower his voice and use gestures and pauses to drive home a point.

After the prepared speeches were delivered, student evaluators took the podium and gave their peers feedback.

“There’s one thing you needed to try to improve on — it’s that you were looking at the ceiling,” Sydney said. “You should be looking more at people. The one takeaway is that overall, you did a very good job.”

Vincent Locatelli, 10, was put on the spot and gave an extemporaneous speech on an imaginary animal: the finkleheimer.

“It’s a mythical beast,” said Vincent, pausing to giggle and think. “It would be a big, hairy, tall thing with tentacles, a mermaid tail, claws, 20 feet tall.”

He exhaled long and slow.

“It eats paper, trees, what are those called? It would … I don’t know, it would slither on the ground with a big serpent tail thing, whatever. And it would swim the lakes and whatnot. Poof. And yeah, that’s the finkleheimer.”

The class exploded with laughter and applause.

Vincent said he’s never had stage fright and loves to think on his feet. The most difficult part of the class, he said, was evaluating his peers.

“You have to listen, not just hear, so you understand what the person is saying,” Vincent said.

“My favorite part was getting your ideas out and having a voice.” 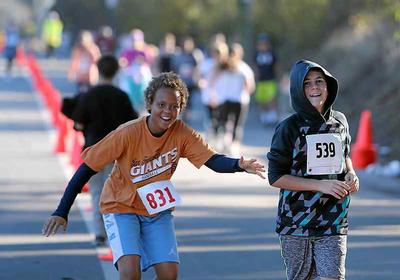 SANTA CRUZ >> A dozen students from Holy Cross School ran the Santa Cruz Turkey Trot with a bigger sense of purpose on Saturday, sweating out the miles for mitochondrial disease patients.

One of the students, 12-year-old seventh-grader Maggie O’Rourke, said her cousin has mitochondrial disease, which is a cell disorder that can damage the brain, heart, nerves, muscles and other body parts. When one of her teachers, Lauri Raffetto, heard about her cousin’s battle, she contacted him and leaders from the United Mitochondrial Disease Foundation to get in touch with three other patients in the San Francisco Bay Area.

Raffetto, an avid runner, wanted her students to get to know them and race for them because the disease limits their mobility. Her class sent letters, packages and pictures to the group, including Maggie’s cousin, 27-year-old Ryan O’Rourke of Morgan Hill.

“We’re running for the disability but we’re recognizing them as kids or as people too,” Raffetto said.

The other buddies include a 4-year-old boy, two 13-year-old girls and an adult woman.

“They were so happy to have contact with somebody and have somebody be their legs and run for them,” Raffetto said.

Just past the finish line of the 5 kilometer race, which ended on Delaware Avenue in Santa Cruz on Saturday morning, Maggie O’Rourke said her cousin and the rest of the group inspired her. A few hundred people participated in the 5 kilometer and 10 kilometer races, which took place in crisp and cool conditions on a mostly flat course on the Westside of Santa Cruz.

“I was thinking about them and how we’re running for them and how they don’t get the opportunity to do this stuff,” Maggie O’Rourke said.

She said the correspondence had been interesting.

“We just ask them what are their favorite subjects in school, what do they like to do in their free time and the normal questions you’d ask if you’re trying to get to know someone,” Maggie O’Rourke said.

Ryan O’Rourke said this week that he appreciated the students’ running for him and promoting more research of mitochondrial disease.

“Events such as the Turkey Trot, where the Holy Cross students are running for me and others with mitochondrial disease, helps raise awareness for this rare ‘orphaned’ disease,” he said.

He said he wanted to continue “promoting medical research on mitochondrial disease and education regarding the broader impact of mitochondrial dysfunction on human health.”

Raffetto said her students plan to run in the Jingle Bell Rock 5K in Santa Cruz on Dec. 6 and another race in the spring with the same group in mind.

“It’s about looking past the disability while still being there for them,” Raffetto said. 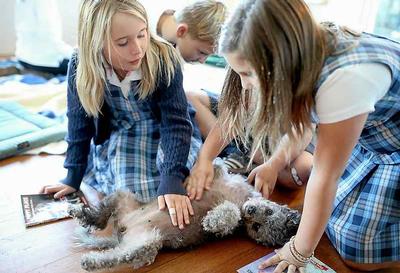 While his head rested in one child’s lap, paws in the air, another child rubbed his tummy as she read to him from her favorite book.

“When we do read in front of a lot of people, it’s kind of nervous,” said 8-year-old Gabrielle “Gigi” Casper, who brought a short storybook featuring “Cinderella” to read out loud. “So when we read to dogs, they won’t say anything about it, or when we mispronounce a wrong word.”

After getting past the excitement of meeting Kitty, Timmy, Mikey and Electra, all small “lap dogs,” and settling onto a room spread with soft blankets, the soft babble of children reading broke out across the room. The dogs shifted from reader to reader, searching out their favorite spot.

“We thought it would be fun to do an animal buddy program for the younger kids,” Smith said. “It builds awareness of adoption, rather than shopping. We hope to come every two to three months, so our class will ‘adopt’ the SPCA.”

In addition to their excitement and budding reading skills, the class brought donated blankets and pet toys along with them, gathered by the school’s student council.

“It’s fun. I really like reading to dogs,” said 8-year-old Nicholas Saldavia, gripping his favorite book, “He Came with the Couch.” “I didn’t know how fun it was.”

The SPCA houses rescued cats and small to medium-size dogs that have had little luck being adopted through shelters both locally and across the state. All the animals that come to the 2685 Chanticleer Ave. site stay there until shelter workers can find them a “forever home,” said humane educator Brenna Ewing.

In different shelter rooms, a small handful of the friendliest pets were the focus of each group’s devoted attention. Several in the class went to see Saturn the cat. Giuliana Spanu, 8, read a short excerpt of “Magic Bunny” while the cat “laid there,” she said.

“They don’t tell you what to read,” said Giuliana, who estimated she had hundreds of books at home. 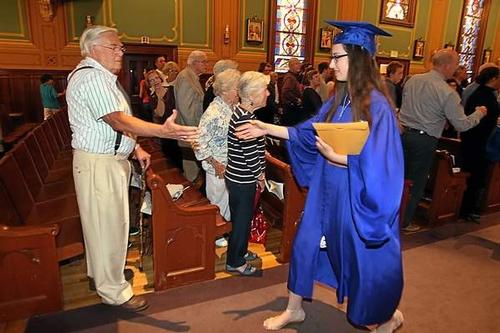 SANTA CRUZ >> Gwen and Galen Wilcox were married in 1943. On Wednesday night, they sat together in Holy Cross Church and watched Nick Beard graduate from the eighth grade.

The Wilcoxes are residents of Dominican Oaks Senior Living Community. They have also informally mentored the 14-year-old Holy Cross School student for the past nine months as part of a project dubbed “Senior Buddies.”

The idea for Senior Buddies developed while Holy Cross School teacher Lauri Raffetto was brainstorming community service projects with her eighth-grade class at the beginning of the school year.

“Our students mentor kindergartners. Someone suggested getting seniors to mentor the eighth-graders,” she said. “It was a great idea on a lot of levels.”

In addition to bringing much-appreciated activity into the lives of the seniors, Raffetto said she felt the mentoring partnership would be an excellent way to bring American history alive.

“Galen and Gwen suffered through the Great Depression, which was this really big collapse of the economy that affected the middle and lower classes; meanwhile the rich just got richer,” said Nick, 14. “They were married during World War II and then they’ve stayed married for over 70 years.”

When asked what the couple had taught him about life, Nick said, “That a relationship with another person can ease the struggle of life.”

“It was a wonderful experience to share in his young life,” Gwen Wilcox said.

Dominican’s Harry Frederico sold insurance for decades until he retired to travel the world and become an artist.

“He’s a painter and a sculptor and he’s been everywhere except Antarctica,” said Lexi Butler, 14. “He taught me to follow my heart and have passion no matter how old you are.”

The eighth-graders visited Dominican Oaks once a month during the school year to chat about life and put on musical performances for their mentors.

“We sang songs from Sound of Music and did Abbott and Costello routines and a radio play, The Shadow,” Lexi said. “The last song we sang for them was ‘Forever Young.’”

“It’s been satisfying for our residents to share their lives with the young people,” Paylow said. “And it really worked both ways. I think they learned something, too.”

Elfride Wegener was born in 1928. After the Russians invaded Germany during World War II, she fled to the U.S.

“She was planning to go to college, but she never got the chance because the Russians took her savings,” said Luke Germani, 14. “It’s hard to imagine everything she has seen.”

Wegener said she was equally impressed with Luke.

“He is an exceptionally interesting young man,” she said. “It was a pleasure for me to see young people so well behaved and intelligent.”

After the graduation ceremony, the 18 graduating students lingered at the front of the church to say goodbye to their mentors.

“I have four daughters and Lexi is like my fifth daughter now,” said Frederico. “It’s an emotional experience letting go.”

Raffetto said she intends to continue the mentoring program next year.

“This year’s seventh-graders have already been asking about it,” she said. “And a lot of the eighth-graders are planning on staying in touch with their mentors. They’ve become an extended family.” 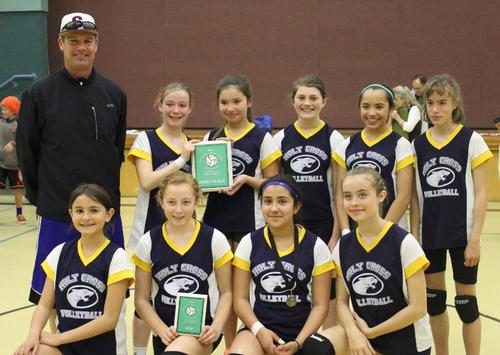 Under coach Guy Putnins, the team went 12-0 in regular season play, including a 6-0 sweep in CCAL play. After taking down San Lorenzo Valley and Branciforte, Holy Cross defeated Scotts Valley in the tournament championship on March 5, 25-18, 25-13. Sarah Jutson was named tournament MVP and Sophia Carrera was named to the all-tournament team. 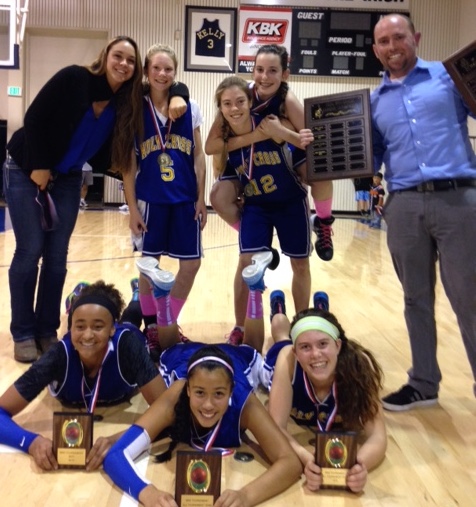 Santa Cruz, Calif., Jan. 12 , 2015 — Holy Cross School’s 8th grade girls basketball team is small with only six players, but they finished a big season with an undefeated 27-0 record. After upsetting Bret Harte in the finals of the Willow Glen Holiday Hoops Tournament in December, Holy Cross has now earned an automatic bid to the NorCal Middle School Basketball Championship in Santa Rosa on March 7 - 8, 2015.

“These girls are special,” said Coach Paul Brown of his team which finished 12-0 in league play while going up against much bigger schools in Santa Cruz county. “They make me proud everyday. Since we only have six players, our girls have to play the majority of the game without a break, no breathers and very little substitutions. They do it and never complain. They do it as a family.”